Marquis Equine has been licenced as a riding establishment with the local authority (North Norfolk District Council) since July 2014.

In November 2018 new regulations came into force and riding establishments are now rated and given a star rating out of 5.

We are pleased to say that Marquis Equine has achieved 5 stars. 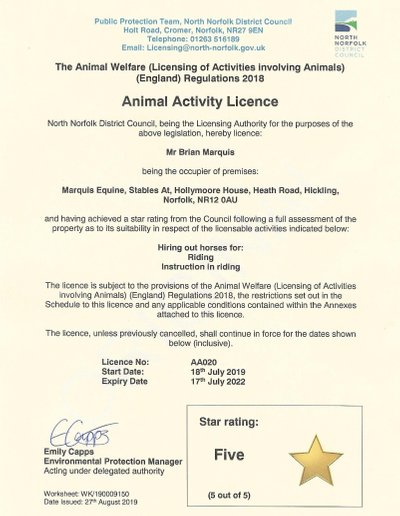 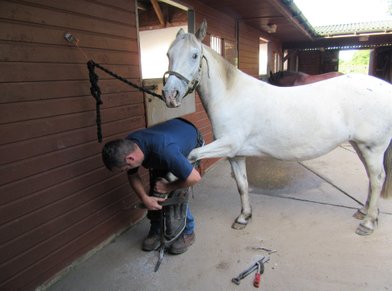 We work closely with Westover Veterinary Centre to make sure that Mollie, Jess & Maggie all stay in good health.  They are vaccinated annually against equine flu and tetanus as required  They have an annual dental check.

Brian Marquis has more than 25 years equine experience in many different disciplines including stable management, instructing, breaking-in and the training of horses for show jumping, eventing and ceremonial occasions.

He has competed professionally in:

Brian’s career began as an apprentice jockey based at Newmarket for the renowned race horse trainer the late Sir Henry Cecil. Learning the basics of flat racing Brian competed in several races before moving to Holland as stable jockey and assistant trainer for Pete Van Da Gore.

When he returned to the UK he took up a position as personal groom to Lord and Lady Somerleyton (Suffolk) where he had total responsibility for the care of his Lordship’s 15 horses.

Joining The Kings Troop RHA in 1981 Brian expanded his skills to include the breaking-in of horses to harness and for ceremonial duties. Brian passed his equine management exams with distinctions and then he went on to complete the six month long Military Riding Instructor's Course at Melton Mowbray which he passed successfully.

Brian had up to 18 horses and 20 soldiers under his management during his military service and as a lead driver Brian would ride leading a team of 6 horses and 3 other riders during the notorious musical drive when horses are travelling at full gallop and complete the dangerous scissor movement. Brian toured with the Troop throughout the UK to various county shows including The Royal Windsor Horse Show, The Royal Show at Stoneleigh, The Royal Norfolk Show and The Lincoln County Show. During his career Brian has performed at the Royal Tournament on more than 5 occasions. World travel included the Berlin Tattoo and performances in the USA, Sweden and Holland. Brian has the experience of having performed many “tricks” and more obscure rider talents as he has performed vaulting, tent pegging, skill at arms and riding standing on 2 horses at once!

Brian’s successful military career was put on hold when he became a full time Dad but he was able to restart his equine career in 2005 working as a freelance instructor.  In 2009 he moved to Hickling, continued as a freelance instructor but had the facilities for livery and for the breaking and re-schooling of horses.  In 2014 he moved the focus of the business to become a riding establishment teaching both regular clients and holiday makers.  A new ratings system for riding schools was introduced at the end of 2018 and on first inspection under this regulation (July 2019) Brian received the highest rating of 5 stars from the local district council.

Brian looks forward to sharing his experiences and knowledge with you